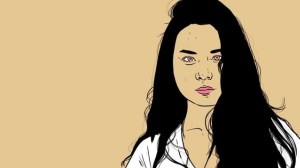 On the morning of 10th January 2016, I woke up alone in a 12-bed hostel dorm in Prague. By the time I’d stumbled downstairs to breakfast, I already knew why there was nothing but David Bowie playing on the stereo. It seemed like the young year had slumped to an early, heartbreaking nadir. I didn’t know then that it was just the tip of a nosedive, that the whole world was due a relentless live stream of hatred, disappointment, fear, anger, betrayal. That it would be a capitulation.

It would be sentimental to assume that the rest of the year’s artistic output mirrored that sadness – each season bears its more or less equal share of mischief and melancholy – but perhaps those writers and storytellers who worked in shades of black found an audience who, for a long time, could see nothing else. Even Kanye put out an album riddled with prayer, paranoia, and self-doubt. Even Kanye, this year.